Captain Pete "Maverick" Mitchell is a US Naval Aviator and the main protagonist of Top Gun and Top Gun: Maverick.

Throughout the movie, it is acknowledged that Maverick is an excellent pilot but has reckless tendencies in the air that potentially endanger himself and his wingmen. Early scenes in the movie such as Maverick's encounter with an unnamed MiG-28, he inverts his F-14 Tomcat and flies above the MiG canopy-to-canopy to irritate and intimidate the enemy pilot that was painting Cougar with a missile lock. This both impresses some characters and annoys others due to the "danger" Maverick exposes them.

Maverick's skills are not confined to flying. Early scenes in the movie show Maverick driving a motorcycle at high speeds. He is also quite skilled with the ladies, and manages to establish a relationship with Charlotte "Charlie" Blackwood. While at TOPGUN he meets LT Tom "Iceman" Kazansky, who becomes his rival as well as LT Rick "Hollywood" Neven and LTJG Leonard "Wolfman" Wolfe.

During a training flight late in the TOPGUN program, Maverick's plane suffers a flameout in its starboard TF30 engine after flying through Iceman's wake turbulence ("jet wash"), while chasing LCDR Rick "Jester" Heatherly. It caused his plane to flame out and then enter a flat spin. While Maverick struggled to get to the ejection seat lever, LTJG Nick "Goose" Bradshaw pulls the lever. As Maverick ejects, Goose is slammed into the canopy by his seat's ejection motors, breaking his neck and killing him instantly.

Even though he was cleared of wrongdoing in the accident, Maverick blamed himself over Goose's death. He turns to his mentor and friend of his father CDR Mike "Viper" Metcalf for advice, and finds out the truth about what happened to him during the Vietnam War.

While at the TOPGUN graduation he finds that he, Iceman, Hollywood, and Wolfman are needed on the USS Enterprise. LTJG Sam "Merlin" Wells who was originally LT Bill "Cougar" Cortell's RIO becomes Maverick's new RIO. He & Merlin launch from the Enterprise after Hollywood and Wolfman are shot down. During the dogfight with the MiGs Maverick is haunted by Goose's death which causes him to briefly disengage. As clings to Goose's dog tags & says "Talk to me Goose!" he reengages in time to save Iceman. Maverick shoots down three aircraft to Iceman's one, forcing the remaining enemy aircraft to retreat.

Maverick and Iceman return to the aircraft deck, and tell each other they can be each other's wingman. Maverick then throws Goose's dog tags in the ocean, having moved on from his death. He tells CDR Tom "Stinger" Jardian he wants to be an instructor at TOPGUN, having been offered any assignment he chooses. Maverick then returns to Miramar and goes to a bar, where he reunites with Charlie.

More than 30 years after Goose's death, Maverick is still in the pilot's seat, pushing the limits of what his body and his aircraft can do. He is currently doing all he can to avoid being promoted, as that would lead him to one place he dreads - out of the sky. He is now training a detachment of young TOPGUN graduates, including the son of Goose, LT Bradley "Rooster" Bradshaw.[1] Maverick also has painful memories about Goose and how he died when he saw Rooster playing "Great Balls of Fire" on the piano and having fun with his fellow aviators.

During the training he got grounded but then was approved to be team captain on the attack on the uranium enrichment plant. Unfortunately he sacrificed his jet to save Rooster from a missile. He ejected but was chased by a Mi-24 Hind until Rooster shot the gunship down. Rooster then got shot down from a SAM and ejected. The two hijacked an old F-14A Tomcat and took down the Su-57s. The two were latter saved by LT Jake "Hangman" Seresin and they returned to the carrier and then head home.

Afterwards, Rooster reconciles with Maverick. Some time afterwards, Maverick and Rooster work on a P-51 Mustang when Penny arrives. Maverick takes her for a ride in the P-51.

In order of precedence: 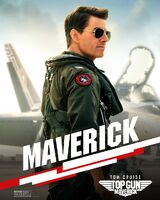 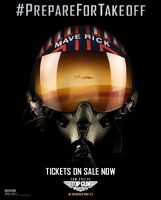 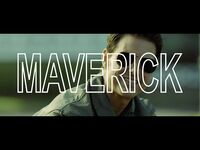