View source
watch 01:36
We're Getting Mutants in the MCU - The Loop
Do you like this video?
Play Sound

The 2 seater Grumman F-14 Tomcat was the US Navy's air superiority fighter, tactical reconnaissance platform and its fleet defense interceptor.

The F-14 replaced the McDonnell Douglas F-4 Phantom II in 1974 and in turn replaced in 2006 by the Boeing F/A-18E/F Super Hornet in the US Navy. The F-14A Tomcat is still in use today with the Iranian Air Force.

The Grumman F-14A Tomcat is the signature aircraft of Top Gun.

The Grumman F-14A Tomcat makes an appearance in Top Gun: Maverick used by the "Rogue Nation". It appears to be in an aged state, but if (in the hands of the right aviators / with skill & strategy, etc.) still capable of outing the 5th generation Sukhoi Su-57.

F-14 takes it into the vertical. 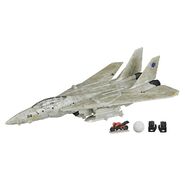